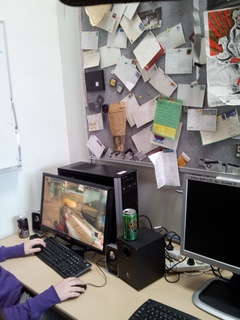 Towards the end of 2017, UCCmittee purchased two new powerful machines, named Caan and Chubsucker. One to be Linux and one to be Windows.

Both machines were initially installed with Windows. When UCC recieved a HTC Vive from Gabe Newell himself, some smartass decided to just steal Catfish's harddrive and stick it in Caan instead of properly installing Windows.

This kills the Caan. Catfish was reborn in a new body like some kind of messed up body-swapping mythical creature that takes over bodies to live forever.

The hail storm, [BOB] and [CJS] for building it.