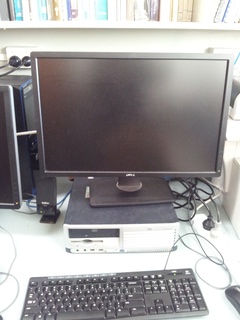 Donated by [FEL] early 2010 to form the guts of a very heavy kiosk terminal (ex-Centerlink) he'd bought in an auction.

The kiosk lacked a mouse and a control key (amongst other things, such as dignity), so that got thrown out pretty quickly. Got a graphics card and a nice big LCD screen a few months later.

The pinball that the clubroom knows today is a very different pinball. This wiki page is not up to date.

[FEL] for donating the box