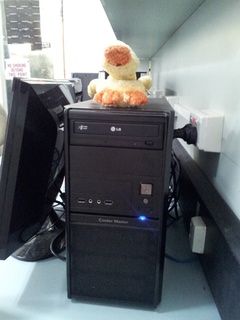 Originally running Debian 6.0.0 "Squeeze". [BOB] tried to upgrade it to Debian 6.0.4, which subsequently failed to detect the SSD hard disk. [*OX] and [SLX] installed PC-BSD in late 2012. [SZM] broke X by trying to install pygame. He fixed it by replacing PC-BSD with Scientific Linux.

[SZM] has taken to calling Cabellera this, due to it's terrible graphics issues, inability to detect hard disks, and general evilness. Debian was reinstalled from scratch around 5 times before it finally started working. And then it broke again, so someone installed PC-BSD. And then that got broken...

[*OX] and [SLX] for installing PC-BSD. [SZM] for replacing PC-BSD with Scientific Linux.