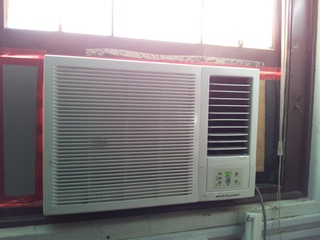 Antarctica was previously kept at The Good Guys in Osborne Park, where it led a quiet life as a display unit. Bought for its ability to restart with previous settings after a power failure and auto ice-up protection, Antarctica was very happy to escape The Good Guys.

Much debate went into the purchase of Antarctica, since we had previously had multiple smaller air-conditioners, and a single unit posed a single-point-of-failure risk. This argument was ignored by the dictator treasurer at the time - BobAdamson, and the club got a non-sucky aircon for the first time in its history.

Installed in April 2010 by [CJS] and [BOB], with [CJS] holding on to the other end of the rope while [BOB] dangled out the window with a drill. Much debate was entered into as to whether Antarctica is in fact a desert.

The Great Storm of Perth
[CJS] for sacrificing his ute to the cause. I'm sure he will never forget the park brake again.

Looking After the Machine

In the event where the machine is no longer cooling satisfactorily, it is likely that the drainage system is blocked. You can check if this is the case by looking in the drip tray in the front left corner of the machine. If it is filled to the brim with water, it needs cleaning. You should be able to poke some dust out of the way using a flattened straw or similar and sliding it down the middle of the drip tray. To properly clean this you will need to pull the air conditioner apart.

To pull the air conditioner apart you will want to find a friend, as it is very cumbersome to move. There is a screw on either side of the machine that need to be removed. There are also two screws behind the big dust filter that hold the front plastic face plate on. You want to remove all of these. To remove the front face plate you want to push the plastic out and the metal in on the left side so it unclips. You can then shimmy it to the right to get the clips on the right hand side to unclip too. Unplug the front panel. You can then slide the air conditioner out to clean it. Be careful as it is really heavy, you are possibly better off sliding it out and having something there (like a pile of servers) to support it.

If you have questions about cleaning it, you can talk to [BG3] or [NTU] as they have cleaned it before.